Learn how to put a song on itunes at ReverbNation.com

David Martinez returns to rock at Rockit's on the Patio! Come join the fun!! 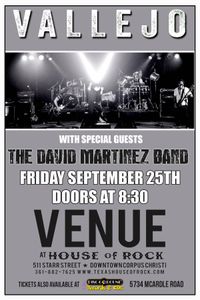 Join us for a great night of music as we join our friends Vallejo at the House Of Rock.

Schlitterbahn's Veranda Restaurant and Bar on Padre Island in Corpus Christi is ready to serve your next great meal. Our mouthwatering menu begins with an array of appetizers, soups and salads.  Delectable entrees include everything from delicious seafood, steaks and chicken, to burgers, sandwiches and pizza. Put the finishing touch on your meal with one of the Island's favorite desserts, our soon-to-be-famous Julian's Bread Pudding, or one of the other dessert selections.

Singer/songwriter sensation David Martinez of Corpus Christi, one of the most in-demand musicians in South Texas, has been touring regionally with much success both, acoustically, and with The David Martinez Band. For the uninitiated, David’s music is a soulful refreshing mix of Jack Johnson’s laid back lyrics stirred into a glass of Lenny Kravitz funk. David launched the Live At Aloft independent music series at the Grand Opening of the Aloft Hotel Corpus Christi in 2018, and additionally was featured in an exciting evening of music and art, showcasing his signature style along with the visual artwork of noted local artist Louis Albert Garcia. A portrait of David on stage was painted by Louis and is on prominent display at the luxurious new hotel. In addition to showcasing regularly at Aloft, David has several local residencies at area hot spots including running the popular ‘Live Music Fridays’ Series throughout 2018 at Crawdaddy’s Downtown, along with regular appearances at Mesquite St. Pizza and Pasta Company, a mecca for touring comedic acts. David has completed a tremendously successful 2018 summer tour, once again sponsored by Texas Select Beverage Company and this year by new sponsor Light Up The Love TM, a global movement movement used to inspire acts of peace, love & unity in society.

A SXSW veteran, David has shared the stage with such musical greats as Ian Moore, Vallejo, Billy Joe Shaver, Johnny Rodriguez, and the Statesboro Revue. David and his band have played at these popular area venues in New Braunfels, San Antonio, Austin and on tour:

Marina Arts is a big supporter of musicians in the local South Texas scene, and David frequently performs at their First Friday Arts Walk and other civic events including the Bay Jammin’ Concert and Cinema Series at Cole Park and has also appeared at the CCIA Music Series at the Corpus Christi International Airport.

A founding member of Corpus Christi Songwriters, David performed acoustic sets as part of his‘Summer Wine Hop’ in Texas Wine Country, having been warmly received at Fiesta Winery 290. A new recording project is also in the works for this year, produced by a soon to be publicized Texas studio in an organic, session-like atmosphere.

Airing on radio coast to coast and internationally, David’s music has been heard regionally on C101 Rocks ‘Area 101’ with DJ Monte Montana, on 106.5 The Shark, on 94.7 Jalapeno Country, Radio Katy, on KPFT and KETR, on Texas Select Radio, and on AM 1670 Dewberry Jam Community Radio in San Antonio.

David has completed two US Tours including the East Coast Acoustic Tour – ‘Crazy Ride’ in 2013 presented by LadyLake Entertainment and the Envision Indie Coalition, which spanned the entire East Coast from Florida to Boston, and recorded three professional CDs, his most recent being the award-winning album ‘Piece Of Me’.

New Album "Piece Of Me" by David Martinez now available: